Why does my child never do anything at nursery?

Today I was involved in a really interesting discussion around how children become effective learners and the need for them to direct their own learning and become independent thinkers. After all, isn’t this what is supposed to make us stand out from the Chinese, as our little free-thinkers can become really successful in adult life, despite a very different approach to learning?  The discussion focused on ‘process vs product’ and how many of us,  as parents, are guilty of wanting a nice picture or hand-made Mother’s Day card to take home and put on our fridge, rather than appreciating some of the experiences our children have had at nursery.

Many of the practitioners I was with were concerned that some times parents want tangible evidence of perceived learning, like pictures and models, which they could take home. Whilst it is fantastic to value work that children have produced and it can really enhance their self-esteem to see it recognised and displayed, not all children choose to learn in this way. At our nurseries we try and capture moments as well as ‘products’ by using photos and videos and sharing them via the child’s e-learning journey. However, perhaps we should all be asking children, ‘what have you had a go at today?’ rather than ‘what did you do/make today?’. This High Scope poem sums it up beautifully: 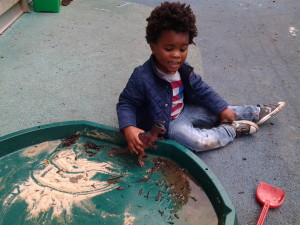 At quarter to three by the Nursery door
Having rushed round to finish the final chore,
How many times have you heard yourself say?
“Oh I do hope my child has done something today.
He just runs around and messes about
And never seems to notice the painting is out.
I wish I had a child who would make things too,
But the staff don’t make him sit down and glue.
My niece brings home cardboard box models each day,
While mine comes home messy, covered in clay.
Last week he’d played pirates, and hid in a den;
The model that day was a beautiful hen!”
But how does a child bring home in his hand
The pleasure he felt today in the sand?
Has he asked you to share the wonder he felt
As he watched some ice cubes gradually melt?
The excitement of sailing the climbing-frame boat?
The achievement of fastening the buttons on his coat?
Did he tell you he washed up after his tea –?
Expertly prepared by his friend, who is three?
He gave me a cuddle around story-time,
And was keen to join in when we learned a new rhyme.
He pummelled and prodded and pounded the dough,
Then he showed he could walk round the room on tip –toe.
He persevered to finish a puzzle, quite hard,
So he hasn’t had time to make you a card.
He came over and watched some children sew,
And thought perhaps next time he’d have a go.
His experiences gained were richer by far
Than tissue paper flowers in a yoghurt-pot jar.
A child can learn from cutting and sticking
(But not if all he does is the licking)
And if adults resist the temptation to say
“No! Not like that. Do it this way.”
When your child is cutting and gluing
It’s not the result that matters, but DOING.
So next time, don’t ask your child to explain
Why he’s not done a model or painting again;
And when you pick him up, please try not to say
“Haven’t you DONE anything in Nursery today?”

Welcome to the Sandhills Group of nurseries!

Have you bought an Easter egg (or 3) for your…

We celebrate Millie's Mark at our Faringdon nursery