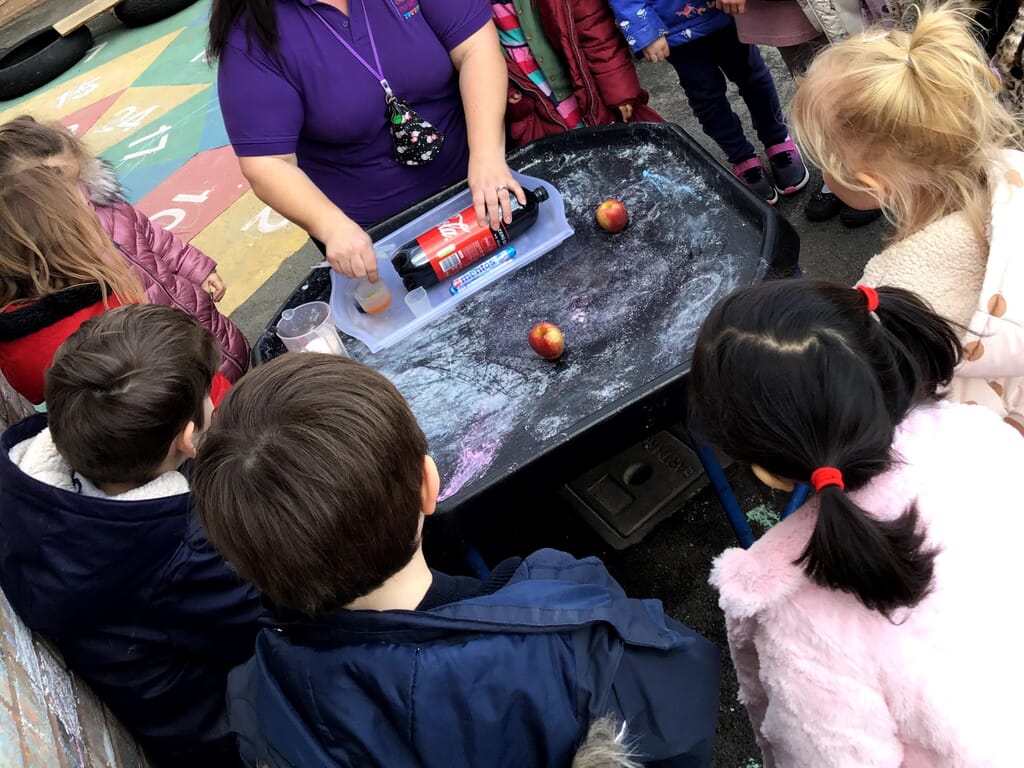 Welcome to February’s newsletter! It’s been a busy month at Houlton and we have lots to share with you all. But first, we hope all of our families enjoyed their Valentine’s gift from their children; a little love can go a long way in these challenging times.

The children in preschool have taken part in a range of science experiments this month, investigating the word ‘eruption’, and exploring and comparing how different combinations of materials could produce a variety of explosions. Although the children enjoyed the apple and bicarbonate volcanoes, and were able to experiment over several days until they found exactly the best amount to put in, a lot of them were in awe of the reaction from the Coke and Mentos in the bottle!

The team then extended this interest in trajectory with children making their own pom-pom launchers using plastic cups and deflated balloons. The children explored forces and the impact this can have on trajectories, competing with each other to see who could launch their pom–pom the furthest. This led to much discussion on muscles, what they are for, how we can keep them healthy and build then up through exercise and diet.

Before half term, all the preschool children enjoyed exploring the Chinese New Year resources which the team introduced to captivate their imaginations. The children liked discussing the photos and illustrations in the topic books, using their creative skills to join in with interpretive dragon dancing with the dragon puppets, and copying symbols using brushes and paint. They tested their motor skills by using chop sticks when tasting Chinese food, although the crispy seaweed was definitely not popular!

During half term, we also celebrated Pancake Day with the preschool and Angels Holiday club children. Obviously, the children all ate delicious pancakes, but there was also much hilarity with our pancake races and pancake tossing competition. Well done to all the children who took part and showed such a can-do attitude!

What’s coming up in March

World Book Day is on the Thursday 4th of March and we would like to encourage children to come dressed up as their favourite character from a book. Usually, we ask for children to bring in their favourite book as well but due to the current infection control procedures, we won’t be able to do that this time. Instead, we are going to be making the most of our stage area in the outdoor classroom and supporting the children to act out their favourite part of the book that they are dressed from.

On Friday 19th March, it is Red Nose Day. This year, Comic Relief have teamed up with CBeebies and JoJo & GranGran to make it a Red Nose Day to remember. To join in, we would like to encourage the children to wear bright clothes on the day, to go with their carnival crown that they will be making in preschool.

In February, a training webinar attended by staff discussed research that demonstrated children’s ability to hit a moving target with a bat correlated with more advanced skills in mathematics. It explained that predicting the trajectory and speed of a ball and moving your arm to meet it, involves ‘neural circuitry’ to represent time and space, which overlaps with that representing number. So, children who are good at spatial visualization can also form mental images of numerical relationships! We thought that this was really interesting and have purchased a wider variety of equipment to encourage the children to further develop this skill as well as extending February’s interest in trajectories.

Congratulations to Carly who has completed her Time to Talk Level 3 training in February and is now fully trained to use WellComm screening and resources to help identify and support children with speech and language delays in preschool. If you do have concerns about your child’s speech and language, your first port of call would be your child’s key person.

We have accumulated a small amount of lost property, mostly gloves and mittens, which do not have any names inside. Please may we remind families to name belongings and if they are missing anything, speak to a member of staff.

We will be holding progress update telephone calls in the week beginning 1st March. If you would like an appointment to discuss your child’s learning by telephone, please email the nursery to book a time slot.

Thank you for your continued support.