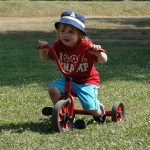 This has been another frustrating week to be in Early Years. It makes me sad to start another blog post with such a negative statement, but it feels as though there is always something to fight at the moment. I have some great nursery teams, with really dedicated practitioners who truly go that extra mile to make lives for the children in their care as great as possible, and who also provide a lot of support to the families who come in our doors. However, at times the system seems determined to make life as difficult as possible for those of us trying to deliver great care and education.

Within the sector there is an increasingly loud rumble of concern about OFSTED inspections and the subsequent judgements that are made. We have had the most frustrating experience at one of our nurseries in Gloucestershire, where we had an inspection in May and the inspector gave us a ‘GOOD’ with lots of positive comments, and few suggestions on where we could improve, but no actions or recommendations. She was an informed and experienced individual, who showed a really good understanding of Early Years. However, within a week she was back on the phone, and explained that as we had a compliance action in September 2012,  which resulted in a follow up visit from OFSTED, there was no way we could be graded ‘GOOD’; the only option was ‘SATISFACTORY’. So said the quality assurance team at Tribal.

I appealed the decision, as my team were devastated; since the compliance action we had taken all the necessary steps to remedy the situation (a member of staff recording a dose of mediation incorrectly) and the inspector at both the compliance visit and the full inspection had been very satisfied with these steps. The member of staff involved had been disciplined and subsequently left the company. The manager had been in her last week in post when it occurred, so there had been significant management changes since the issue. The new manager rightly felt extremely disappointed that the experience of the inspector on the day was now being downgraded due to something which happened 8 months ago, under a different manager.

Having decided to appeal the decision, I then spoke to many colleagues in the sector and discovered that we are far from alone. I asked a question to Sue Gregory, head of EY at OFSTED at the NDNA conference last month, but she just repeated that it was really important to have high quality provision in Early Years (yes, we know that, that’s why we care about OFSTED outcomes).  She really didn’t answer my question and sadly, neither did the appeal process. Needless to say, the judgement was upheld, our report was published and we are now ‘SATISFACTORY’. Frustratingly, the report alludes to the compliance issue but says how well we have addressed all the issues. The ‘reason you are not yet GOOD’ is given as ‘some children in the pre-school do not fully participate in routines’.  Unbelievable! So, having decided that we should be ‘SATISFACTORY’, it is not hard to find some statement or other that bumps us down in to that grade descriptor.

I have just asked for the second stage of the appeals process to be undertaken by OFSTED, but hold out absolutely no hope of resolution. I feel that the voice of providers is simply not being heard in this process and OFSTED will always find something to ‘hang’ the grade on that they see fit, following complaint or compliance issue.  Perhaps only when they realise that there are so many ‘SATISFACTORY’ settings out there, that they can not offer sufficient places for funded 2 year olds, will they think again. Or, the more cynical part of me thinks, will they just use these statistics to beat us all up with, decrying the poor quality of PVI settings and finding it easier to reduce funding levels?

The only bright spot on the horizon has been the excellent support we have received from our Early Years Consultant at Gloucestershire County Council. Let’s hope that they are all still around in a few months to continue with this great work. As a sector we must make our voice heard about the increasing unfairness in the OFSTED process and total lack of transparency.