Children don't suffer academically if mothers go back to work

Hooray!  An article in the Independent today reports the finding of Professor Joshi at the University of London’s Centre for Longitudinal Studies, who says that 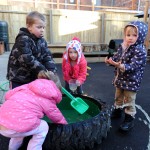 Studies of previous decades showed children’s literacy and numeracy levels were around 2 per cent lower when mothers worked.

Prof Joshi said that the ‘generational change’ coincided with an expansion of childcare. ‘There has traditionally been a concern that the employment of mothers comes at the expense of child development. But as the percentage of mothers in work has gone up, any impact on children has diminished.’ She added, ‘In the 80s childcare was either something that only very rich families could purchase or very poor families got offered because their child was at risk, so everyone else in the middle had to make do with informal arrangements’.

She voiced her concern over proposed Government changes to childcare regulation, saying, ‘This wouldn’t have happened without a big expansion of childcare and if anything happens to funds available for childcare, there may be consequences’.

I hope the Department for Education are listening; we are so proud of the progress made in Early Years over the last decade. Please let this Government’s legacy be one of further improvement, not changes which are designed to attract votes over improving outcomes for all our children.