All change at The Old Station!

At the end of this week we say a very fond farewell to the staff, children and parents attending our Lincoln and Newark nurseries. After 8 years of running the nurseries in this area, we have decided that it is time for a change and to be able to focus within a slightly less enormous geographic area. Over the last 2 years we have moved some of the smaller nurseries (Waterside, Lincoln College) into larger sites and now have no nurseries belonging to Lincoln College on short leases. It has been a busy time but it is great to see the new site on Monks Road, Elm House firmly established as a thriving nursery and to have moved our Newark College nursery into a beautiful old rectory with far better space both indoor and out for the children. So, it is time to pass them on to new ownership and Margaret Mason, owner of the Children First group, based in Nottingham, will become the new owner on Friday 6th June. 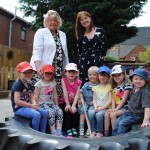 I shall really miss the many staff who have been part of The Old Station Nursery for many years – indeed some of them transferred to us back in 2006 when I bought the group, so it will be a real wrench. However, I know that the team at Children First are looking forward to getting to know everyone and they have an enviable reputation – both for the number of ‘outstanding’ gradings they have to how well they train and support their staff. So, an enormous thank you to everyone who has been part of our community in Lincoln and Newark and good luck for the future for staff, children and families.